Cabbage aphid is the most common aphid species affecting forage brassica crops. Although found throughout New Zealand they appear more frequently in the South Island.

There are several stages and forms of cabbage aphids, with at least 15 generations occurring each year. All stages in the lifecycle are present throughout the year but vary by season. Adults may have wings or they may be wingless. Female adults are able to produce offspring without mating. Winged aphids fly throughout the year, producing large numbers of nymphs in spring (October/November) and autumn (February/March) during the main dispersal flights. A single adult can produce up to 25 nymphs. Established aphid colonies are made up of individuals of several generations of wingless aphids which remain on the plant throughout their life. The rate of development is mainly dependent on temperature. In summer it can take only 7-16 days for nymphs to develop through four stages into adults, with populations building up very quickly. In winter development can take up to 60 days, with populations not as high.

Aphids like tender leaves and buds, sucking plant juices, causing yellowing and curling of leaves, resulting in wilting and stunting of plants, particularly during hot dry weather. In addition to reducing yield potential, heavily infested crops such as summer turnips or rape may be unpalatable to stock. Cabbage aphids also act as vectors, transmitting viruses such as turnip mosaic virus which can result in plant death and reduction in crop yield. 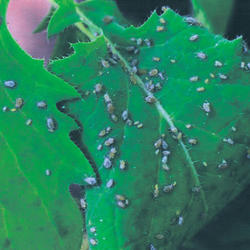 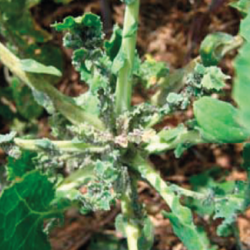