Black beetle is a major pasture pest in many regions including Northland, Waikato, the Thames region, Bay of Plenty and coastal areas of Gisborne and Taranaki, where mean air temperatures are above 15 degrees. Black beetle prefer the sandy, peaty or free draining loam soils of the north.

Black beetle produce one generation per year, with adult females laying 7-10 eggs from late October to late December. Larvae develop during three instar stages over summer, before pupating to adults in February and March. Adults actively feed over the late summer/autumn period before over-wintering in the top 1cm of soil. Black beetle under-go large dispersal flights in spring and autumn when mean air temperatures are above 17 degrees.

Black beetle larvae are creamy white in colour and are found lying in a C shape, similar to grass grub larvae, but are larger reaching 2.5cm when fully developed.Adult black beetle are easily distinguished by the classic beetle appearance and glossy black exterior.

Both larval and adult forms will feed on pasture. The larvae feed on roots of established grasses, which can lead to pasture pulling and brown-off. The adults present the main threat to newly sown pastures, with their transition coinciding with the autumn sow-down. Adults chew at the base of the newly established grass causing the yellowing of tillers, which can result in plant death. Adult black beetle are very mobile, so all newly sown pastures are a potential target for the pest. Populations exceeding 10m2 are considered economically damaging in pasture. 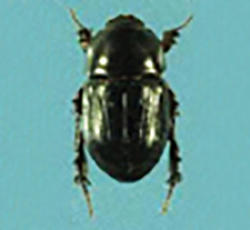 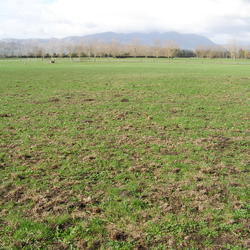