Nysius is a major predator of young brassica crops and is found throughout New Zealand, although it is most prevalent and damaging in warm dry regions. Nysius prefer crops that are open and with the ground exposed to sunlight. Lucerne crops and weeds such as Fathen and Shepherds Purse act as a host for Nysius.

Nysius develop into adults through five nymphal stages during which time wings are developed, which makes them very mobile. Adult populations usually peak over late spring/early summer, which coincides with the sow-down of winter brassica crops such as swedes and kale.

Nymphs are dark orange in colour during early development, becoming brown/grey in the later stages and growing to about 2mm in length. Nymphs can be very difficult to see and it is easy to underestimate how many are present. Adults with fully developed wings are about 4mm in length and are typically a dull brown/grey in colour.

Nysius cause the most damage in the first four weeks after sowing when seedlings are developing. They feed by chewing at the base of the young stem which can destroy the plant and dramatically reduce crop yield. Wind also plays a part in knocking weakened plants over. With larger plants, feeding causes cankerous tissue growth or stem restrictions that appear similar to ‘ringbarking’, which can also reduce yield. Plant damage is often most severe in direct drilled crops. 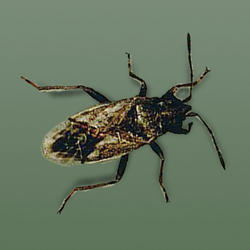 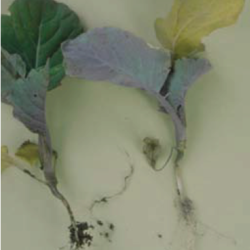