Black field crickets are found throughout northern areas of New Zealand including the Thames region, Northland, Waikato, parts of Bay of Plenty, Gisborne, Hawkes Bay and Taranaki. Black field crickets pose a major threat to new and established pasture over the summer/autumn period.

There is just one generation per year, however the life stages overlap. A female cricket can lay up to 2000 eggs between mid-February and early-May. Eggs are laid loosely clustered about 1cm below the soil surface. After hatching, the nymphs pass through 9-10 stages. Nymphs take 2-4 months to mature into adults which then live for 2-3 months. Smaller nymphs live and hide within pasture, which makes them difficult to detect. Larger nymphs and adults usually live in cracks in the soil or under cow pats and litter. Over-wintering occurs at the egg stage. Adults fly only occasionally with mass flights occurring when numbers are high.

Adult black field crickets are about 2.5cm long and are dark black-brown in colour, with a distinctive white band around their middle section. The adult male ‘chirps’ by rubbing it’s wings together. Nymphs resemble small adults, but do not have wings until the 8th and 9th stages. Black field crickets are often confused with several species of much smaller native crickets.

Feeding by larger nymphs and adults poses the main threat to pasture over the summer/autumn period. Their significance is increased in long dry periods when pastures are under stress and in clay soils that crack during these periods. Black field crickets are active at night, feeding outwards from the cracks they live in. Crickets predominantly feed on grass species, but will also feed on legumes and weeds. There are three types of feeding damage to pasture. 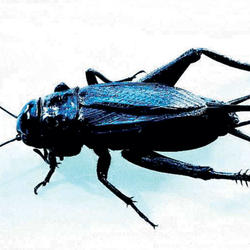