Grass grub is a significant predator of ryegrass throughout New Zealand. They generally prefer regions that have dry summers and cooler winters with lighter soil types such as East Coast regions and the Central Plateau.

Adult beetles fly after dusk in early summer to mate and feed, living only for a few weeks. Females lay about 30 eggs 10-15cm under the soil surface. After eggs hatch they pass through three larval stages over the summer/autumn period before over-wintering. Development from egg to adult usually occurs over 12 months, but under colder conditions the development of some grubs may be extended over two years. Grass grub populations are regulated by several diseases which can only persist if grass grub are present in the soil.

Grass grub larvae are white/grey in appearance, with tan coloured heads, growing up to 1.5cm in length and are typically found lying in a C shape. The adult beetles are shiny brown in colour and about 1.0cm in length.

Grass grub larvae typically feed on grass roots, with feeding at its peak during the third instar stage over the autumn months as fat reserves are built up for winter. The development of the third instar stage from late February onwards coincides with the autumn pasture sow-down. Grass grub which develop over two years may cause some pasture damage during spring in colder regions. Damage typically occurs in patches, with affected plants appearing yellower than surrounding pasture and easily pulled from the soil. At an average population of 200m2 (8 per spade square) pasture damage will be noticeable with large areas opened up for weed invasion and a subsequent loss of production. 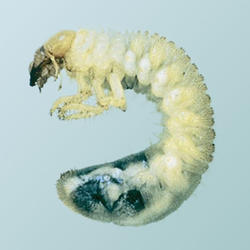 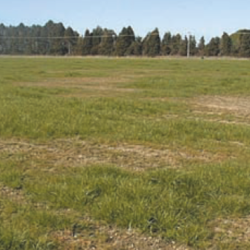